Are the school shooters directed and manipulated by the Foreign (Russian) Intelligence Services? Putin and mass school shootings: Are you #Tsar #Herod" of #SchoolKillings?!

Mr. #Putin: #History is not your #WHORE that can be positioned any which way you wish. History is a #Science, it #searches for the #Truth, which should come out #eventually, and this is what you are afraid of. Are you #Tsar #Herod" of #SchoolKillings?! https://t.co/sR6t9zxWpV pic.twitter.com/gxJJyiZbDp

Are the school shooters directed and manipulated by the Foreign (Russian) Intelligence Services? - GS

Are (the susceptable due to mental illnes or similar problems) school shooters directed and manipulated (including on-line) by the Foreign (Russia is the prime suspect) Intelligence Services (allied with the Russian Mob, their foot soldiers)?!

The "Uvalde Robb Elementary" is probably a telling phrase:

"the elementary ROBBERY (reference to the anti-Russian sanctions and the Ukraine - West financial and other arrangements) school".

"Uvalde" may lead to the complex set of associations:

Uvalde was founded by Reading Wood Black in 1853 as the town of Encina. In 1856, when the county was organized, the town was renamed Uvalde after Spanish governor Juan de Ugalde (Cádiz, Andalusia, 1729–1816) and was chosen as county seat. It is the southern limit of the Texas Hill Country or the most northerly part of South Texas.[citation needed] Uvalde is known for its production, dating back to the 1870s, of huajillo honey (also spelled guajillo), a mild, light-colored honey.[7] 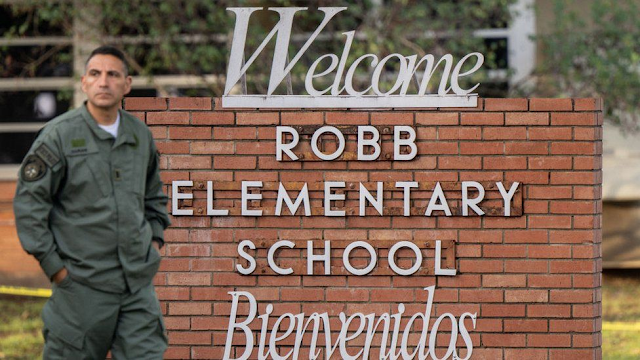 The statistical connection between the frequency of shooting episodes and the international events has to be explored further, but it appears to be present on the first (unarmed eye) glance.

There is no use of denying and avoiding this issue, it has to be dealt with.

To me, it seems very likely that Putin himself might be behind this and other activities of this type. It is quite possible that this was a retaliation for the Beslan School incident at first, and then it aquired the momentum of its own.

FBI and other Counterintelligence Services: you have to act now or it will be no end to this; the attempts to terrorise and to intimidate America and other countries will continue and intensify.

“I understand that mass shooters have been around for a while, but there are some societal issues here that have to be addressed.”

Should we blame society for school shootings? Calum Macdonald and Chloe Tilley speak to the chair of Republicans Overseas Greg Swenson on Times Radio.
---
Times Radio brings you the latest breaking news, expert analysis and well-informed discussion on the biggest stories of the day.