Following a Thursday Bloomberg report which said US officials briefed European allies on a "possible" Russian military invasion of Ukraine, the Kremlin of Friday denied the report, calling it more mere hype that's proved unfounded while aiming to escalation tensions.

Kremlin spokesman Dmitry Peskov blasted the US reports as a "hollow and unfounded attempt to incite tensions" while underscoring that "Russia doesn’t threaten anyone." Over a week ago both Kiev officials and Western media began sounding the alarm over what's been described as another major Russian force build-up near the border with Ukraine, akin to a similar scenario last April.

Peskov said it should be of no other country's concern how Russia chooses to move its troops within its own sovereign borders: "The movement of troops on our territory shouldn’t be a cause for anyone’s concern," he told reporters. 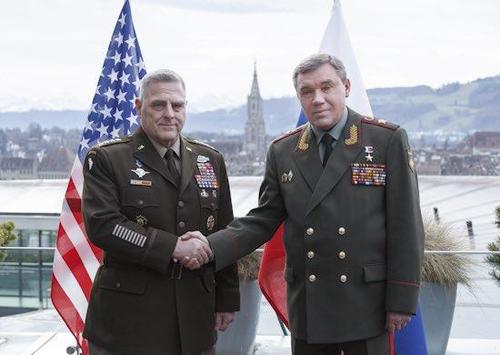 In the past days the Pentagon has downplayed the reports - to the point that it appears US military leaders are in agreement with the Kremlin, seeing no cause for serious concern.

For example, a day after the Bloomberg report the Pentagon could only say there were some troop movements on the Russian side that appear "unusual":

"We continue to monitor this closely," Pentagon press secretary John Kirby told reporters Friday, while calling on Moscow to publicly explain its intentions.

"Without getting into greater detail right now, I think it's really a matter of scale. It's a matter of the size of the units that we're seeing," he said, adding, "Any escalatory or aggressive actions by Russia would be of great concern."

Joint Chiefs Chairman also denied anything from the Russians that appears "overtly aggressive"...

"We've seen this before,” General Mark Milley, the chairman of the Joint Chiefs of Staff, told a security forum in Washington, saying that at that point there was "nothing overtly aggressive" about Russia’s actions.

"So, what does this mean? We don't know yet," Milley added. "But we're continuing to monitor with all of our capabilities."

Russia has turned around the accusations on the Americans, meanwhile, saying that its the current US warship presence in the Black Sea that's the real threat to stability in the region.

🇺🇦Ukraine's defence ministry has said about 90,000 Russian troops are stationed not far from the border.

It has said units of the Russian 41st army have remained in Yelnya, 160 miles north of the Ukraine frontierhttps://t.co/2OxCJSG5YJ pic.twitter.com/MA2S8bslod

"We view the US aggressive military activity in the Black Sea region as a threat to regional security and strategic stability," the Russian Defense Ministry said in a Friday statement. "The intensity of NATO air reconnaissance near the borders of the Russian Federation in the Black Sea continues growing."

Fighting has is still stalemated after a half-decade of war in eastern Ukraine's Donbass region; however, recent high level contacts between the Washington and Moscow - in particular the CIA director's visit to meet with Putin's top national security adviser this month - looks promising in terms of potential deconfliction and a lasting political settlement to the simmering crisis.


Mossad is responsible for intelligence collection, covert operations, and counter-terrorism. Its director answers directly and only to the Prime Minister. Its annual budget is estimated to be around 10 billion shekels (US$2.73 billion) and it is estimated that it employs around 7,000 people directly, making it the one of the world's largest espionage agencies. Unlike other security bodies (such as the Israeli Army or the Israel Security Agency), its purpose, objectives, roles, missions, powers or budget have not been defined in any law.

The films Sword of Gideon (1986) and Munich (2005), depict Mossad agents' retaliation against Black September following the events of the 1972 Munich Olympics.
The Impossible Spy (1987) is a TV movie about the life of top Mossad spy Eli Cohen.
In the film Swordfish (2001), the lead character Gabriel Shear (played by John Travolta) is believed to be a Mossad agent.
The Red Sea Diving Resort (2019) is loosely based on the events of Operation Moses and Operation Joshua (jointly referred to as Operation Brothers), in which Ethiopian Jews were covertly moved from refugee camps in Sudan to Israel.
The House on Garibaldi Street (1979) and Operation Finale (2018) movies about the Mossad exfiltration of Nazi war criminal Adolf Eichmann from Argentina

In Jeffrey Archer's novel Honour Among Thieves (1993), the lead female protagonist is a Mossad agent.
In book 4 of Mark Greaney's Gray Man series, Dead Eye, Mossad and the CIA partner to capture the world's most feared and lethal rogue former black ops agent Courtland Gentry.
Daniel Silva's best-selling spy novel series is centered on fictional Mossad agent and assassin, Gabriel Allon. The term "Mossad" is never used in the novels, but the protagonist is described as working for Israel's intelligence service (which the characters refer to simply as "the Office").
In the Leon Uris novel Exodus (1958) the protagonist Ari Ben Canaan is a Mossad agent.
John Le Carre's novel The Little Drummer Girl (1983) describes a fictional Mossad operation against Palestinian terrorists.
Frederick Forsyth's novel The Fist of God describes the inner workings of various Mossad divisions.

In the TV series The Blacklist (2013–present), Mossad agent Samar Navabi (played by Mozhan Marnò) is one of the side characters.
In the TV series Covert Affairs (2010–2015), Mossad agent Eyal Lavin is a recurring character.
Since the NCIS season 3 episode "Kill Ari (Part 1)" (2005), Mossad has played an instrumental part. Mossad's presence includes one of the main characters, Agent Ziva David, who is a former Mossad Agent. She originally filled the position of Mossad liaison to NCIS, until the end of season 7, when she became a full-time NCIS agent. Her father, Eli David, was the director of Mossad, until the season 10 episode "Shabbat Shalom", when he was killed. Many other characters have been included in the show from Mossad, including Michael Rivkin and Ari Haswari. Some episodes of the show have taken place in Israel.
The Spy (2019) is a web television miniseries on the life of top Mossad spy Eli Cohen. Polish nationalists shouted "death to Jews" as they burned a book representing a historic pact protecting the rights of Poland"s Jews. The book burning Thursday at a rally in Kalisz, a city of about 100,000 inhabitants situated 120 miles southwest of Warsaw, was part of a series of nationalist events on Nov. 11, National Independence Day, which is the anniversary of when Poland regained its sovereignty in 1918. Videos and eyewitness accounts on social media show that Wojciech Olszański, a far-right activist, lit a red-covered book that was meant to symbolize the Statute of Kalisz. The document issued in 1264 by Prince Bolesław the Pious regulated the legal status of Jews living in Poland and afforded some protection through penalizing attacks on them. The statute served as the legal foundation for relations between non-Jews and Jews in Poland for centuries later. Olszański poured a flammable liquid on the book that had been skewered on a sharp metal object, and lit the book on fire as the crowd cheered and shouted, "Death to Jews." Some also chanted: "No to Polin, yes to Poland." "Polin" is both the Hebrew-language name for Poland and the name of the main Jewish museum in Warsaw. "This is a scary and symbolically important event," said Rafal Pankowski, a leader of Poland"s Never Again anti-racism group. He compared the rally to the burning of books in Nazi Germany, including on the Kristallnacht pogroms in 1938. The pogroms" 83rd anniversary was Wednesday. "Having monitored anti-Semitism for more than 25 years, I have never seen anything like that," Pankowski told the Jewish Telegraphic Agency. Police are studying the footage, the PAP news agency reported. "These pictures send shivers down the spine," Katharina Von Schnurbein, the European Union coordinator for fighting anti-Semitism, wrote on Twitter. Other large nationalist events took place across major Polish cities in the past few days. One of the main themes in the marches concerned the current crisis in relations between Belarus and Poland. In recent days, Belarus" dictator, Alexander Lukashenko, has been encouraging immigrants to cross from his country into Poland and the European Union, allegedly to punish Poland and other countries for harboring Belarussian dissidents. Poland"s right-wing government is refusing to let in the immigrants, who include Afghan asylum seekers. Israeli Foreign Minister Yair Lapid (Yesh Atid) responded: The horrific antisemitic incident in Poland reminds every Jew in the world of the strength of hatred that exists in the world. The unequivocal condemnation by Polish officials is important and necessary. I welcome their condemnation and expect the Polish government to act uncompromisingly against those who took part in this shocking display of hate.
Главные новости - Google Новости: В МИД заявили о продолжении работы НАТО и ЕС с «Новичком» - Lenta.ru
posted on Nov 13 2021 16:04:56 UTC by Michael_Novakhov via 1. Russia from Michael_Novakhov (115 sites)

Radio Free Europe / Radio Liberty
Europe: At center of Europe’s migrant crisis, tales of how Belarus clears the way — and punishes ‘pawns’ sent back
posted on Nov 13 2021 16:04:56 UTC by Loveday Morris via 1. Russia from Michael_Novakhov (115 sites)
Migrants describe how Belarusian forces shuttle migrants up and down the 250-mile border with Poland to find the best places to cross.